Cockatoos, both white and black, have increased as a pest in macadamias in the last few years. They damage irrigation lines, eat nuts and chew or nip off young branches and flush.

A cockatoo’s beak is continually growing and they need to be constantly chewing to ensure their beaks remain the correct length and are sharp. It’s like growers sharpening a pair of secateurs so they are ready for pruning.

Whenever they land, cockatoos are either feeding or undertaking beak maintenance, commonly known as chewing! Cockatoos feed and roost together and flocks form when other cockatoos see cockatoos feeding or roosting.

Ryan and Kate Hathaway farm 20 ha of mixed varieties up to 30 years old, at Whian Whian. ‘We’ve been seeing more and more cockatoos as the years have gone on. It’s both white and black cockatoos’ said Ryan.

‘They arrive as the nuts start to size properly and then continue to come back until shells harden. Even then they know which varieties are thin shelled, like our 816 and A16s, then they start to focus on them.’

‘The black cockatoos also come and chew the tips of the flush as well as eat the nuts before they mature.’

‘We looked at a few options for managing cockatoos and with some advice from the Marquis Grower Services Team we settled on the Bird Control Australia 8S Bioaccoustic Bird Repeller. We were chasing a management system that wasn’t a lethal deterrent and this seems to suit fit the bill.’

‘We’re pushing the single unit to its limit as we’re using it to cover more than the recommended area. We could have increased the volume a bit, but we decided to buy a second unit to cover the whole farm. Overall, we’re happy with the results. We’re seeing fewer white cockatoos in the orchards and less damage’

Kate added, ‘The system has 10 different sound libraries that you can change manually using the touch screen or set up the system to automatically change them. We change the sounds every couple of weeks as the cockatoos become used to them. We run it from dawn to dusk, to stop the cockatoos arriving first thing in the morning and settling in at night’. ‘The sound libraries we have selected only seem to deter the cockatoos, the other birds in the orchard aren’t deterred by the sounds.’

‘The system has been running since October,’ Ryan said. ‘We run it off a solar panel which charges a battery to run the speakers. We’re sure it’s working because I used cheap alligator clips originally and they rusted and system wasn’t charging, and we noticed the cockatoos were back.’

‘The team at Bird Control Australia has been great to work with, helping fix any technical issues we had’, Ryan said. ‘ We are currently using the sound libraries that were preloaded into the system and they’re not deterring black cockatoos. At the moment there are less of them than the white cockatoos and they are quieter and harder to see, so we still chase them away ourselves.’ 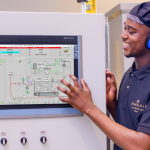